Proposition 61 is opposed by a broad coalition of more than 100 organizations representing patient advocates, doctors, clinics, veterans, businesses, labor unions and many others who warn this deceptive, deeply-flawed scheme would be bad for patients, harmful for veterans and expensive for taxpayers.

The controversial author and promoter of Prop 61 – who is president of an organization that brought in more than $1 billion last year selling prescription drugs and operating HMOs – exempted his own organization from having to comply with the measure.

Below is some important information about Prop 61: 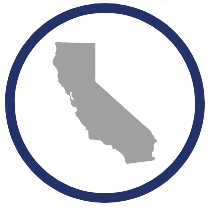 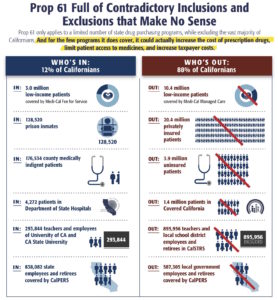 Prop 61 would only apply to an arbitrary selection of Californians in certain state government programs, including some government employees and state prisoners.

More than 88% of Californians are excluded, including more than 10 million low-income patients in Medi-Cal, 20 million Californians with private health insurance and Medicare, 1.3 million in Covered California, and millions of others.

Experts warn that Prop 61 would actually increase prescription drug costs for the state and reduce patient access to needed medicines for the few state programs the measure does cover.

That is why more than a dozen military and veterans organizations oppose Prop 61, including:

“Prop 61 ignores the sacrifices veterans have made for our country. This deeply-flawed proposition could increase prescription drug costs for veterans and their families.  We hope all Californians will vote no on Prop 61 to protect veterans”Dale Smith,
Commander,
Veterans of Foreign Wars, Department of California

Learn more about the measure’s impact on veterans.

Prop 61 would invalidate many existing drug discount agreements the state has negotiated with pharmaceutical manufacturers for its Medi-Cal fee-for-service program.

Invalidating these contracts would require many patients to go through a cumbersome prior approval process before receiving medicines, putting state bureaucrats between patients and their doctors. This could lead to delays in treatment or even denial of coverage for needed medicines.

The California Medical Association, representing more than 41,000 doctors, warns that Prop 61 “could interfere with patient access to the medicines they need.”

Learn more about the measure’s impact on patients.

PROP 61 WOULD INCREASE PRESCRIPTION DRUG COSTS FOR THE STATE

Prop 61 would invalidate many drug discount agreements the state has negotiated with pharmaceutical companies – increasing state prescription drug costs by tens of millions of dollars annually.

Prop 61 is completely vague and contains no guidance on how it would be implemented. Its passage would result in more government bureaucracy, more red tape and lawsuits as state agencies struggle to implement it – costing taxpayers millions and delaying access to treatments.

The controversial promoter of Prop 61 inserted language that would give him a special right to intervene in any post-election legal challenge. He wrote in a provision requiring the state – and taxpayers – to pay his legal bills. It is a virtual blank check at the taxpayers’ expense.

The author and promoter of Prop 61 is Michael Weinstein, the controversial president of an organization that brought in more than $1 billion last year selling prescription drugs and operating HMOs. Suspiciously, he exempted his organization’s HMO from having to comply with his own measure.

Weinstein deceptively claims his goal is to lower prescription drug prices for the state of California. Yet, his organization is currently suing the state of California so it can charge the state more for prescription drugs. His lawsuit has blocked a law that would save taxpayers $10 million a year. In addition, in five separate government audits, Weinstein’s organization was accused of overcharging Los Angeles County by more than $6 million.